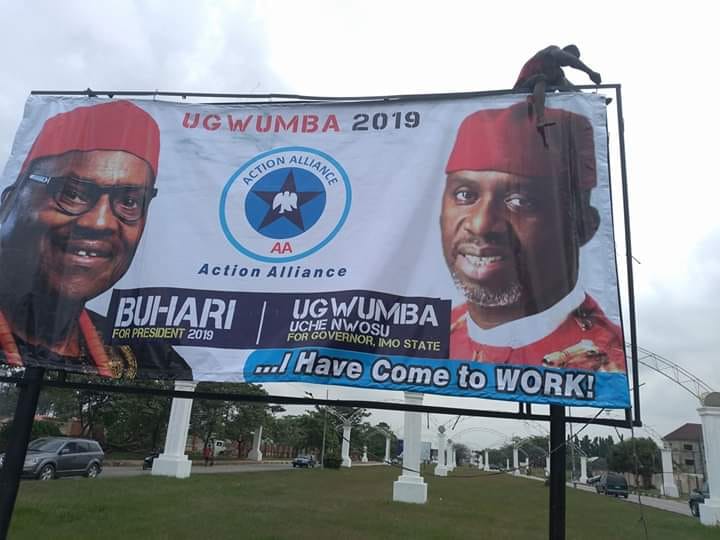 A four or five horse race is now imminent in the Imo State governorship race as Governor Rochas Okorocha’s son in law, Uche Nwosu has finally emerged the governorship candidate of the Action Alliance, AA.

Indications that Nwosu will be on the ballot emerged on Monday when his giant billboards surfaced in strategic areas in Owerri.

The billboards also had the image of President Muhammadu Buhari which indicate that the Action Alliance, AA will support President Buhari’s re- election in 2019.

Political analysts contend that the emergence of Nwosu as AA governorship candidate is a clear indication that the Imo State governorship contest will be a four or five horse race considering the backing he enjoys from an incumbent Governor and a solid political structure already in existence.

According to them, the contest will also be fierce considering the strength, ability and well rooted political tentacles of other governorship candidates such as Senator Ifeanyi Araraume (APGA), Senator Hope Uzodinma (APC), Hon. Emeka Ihedioha (PDP).

They however did not rule out of contention candidates of the  United Progressive Party, UPP, Tony Nwulu Young Democratic Party, YDP, Linus Okorie Social Democratic Party, SDP, Okey Ezeh  who are putting up impressive showing and making appreciable inroad into the electorate as the elections draws near.

Also a new dimension is expected to evolve if reports available to this newspaper of an imminent Rainbow Coalition of governorship candidates pulls through.

Nwosu had decamped to the AA after he lost the APC governorship ticket to Senator Hope Uzodinma.

He and other members of Governor Rochas Okorocha’s Rescue Mission, mostly House of Assembly aspirants had opted for the Democratic Peoples Party, DPP before they eventually left for the AA.

Okorocha says he will remain in the APC to pursue his senatorial ambition, claiming that he lacked the ability to stop his son in law and others who lost out in the scramble for tickets in the APC to seek political succor elsewhere.

innonews - March 23, 2020 0
BY: JAN UKONU The ward and local government congresses of the Peoples Democratic Party, PDP in Imo State,...

innonews - November 28, 2017 0
Super Eagles Coach, Gernot Rohr has been rewarded with a contract extension that will keep him in the saddle in the next two years. Rohr...