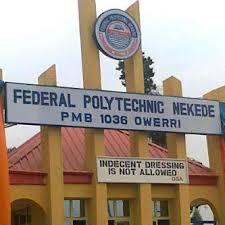 The management of Federal Polytechnic Nekede, Owerri has debunked the rumour making round on social media and the publication of Monday edition of Nation newspaper insinuating killings in the institution.

The management represented by the deputy rector administration Mrs. Antonia Nwosu, the deputy rector academic Barr. M.C Chukwuma, the Registrar Mr. A.I Mathew Aligbe, the bursar of the institution and the Special Adviser to the rector on Media matters Chief Fidel Onyeneke made their expression over the issue yesterday at the campus while addressing Journalists.

In a press release signed by the Public Relations Officer (PRO) of the institution Ever B. Nwosu, the authority of the institution expressed displeasure over what they described as unbalanced reportage by Nation newspaper that alerted that “10 killed, scores injured in Imo cult war”.

The management said there is no cult war in FedPolyNek neither has any student or staff been killed, harass or academic activities ever grounded in FedPolyNek because of cult war.

“The State Polytechnic at Umuagwo is different institution from the Federal Polytechnic Nekede, Owerri. To the knowledge of the Polytechnic, none of its students had been killed, maimed nor harassed in the midst of any cult war, no incident as reported ever took place in Federal polytechnic Nekede neither was academic activities ever grounded in FedPolyNek whether as a result of any imputed cult war or any cause whatsoever.

“The management reiterates once again that none of those incident took place in the Polytechnic, neither was any of its bonafide students affected or its academic activities grounded in any guise, there is no police deployment into the campus, the polytechnic however expresses it’s implicit confidence in the ability of the State police commissioner and State Director D.S.S. to handle any incident on alleged breaches of public peace in any part of the State” the release stated.

innonews - July 30, 2022 0
A chieftain of the  All Progressives Congress, APC in Imo State, Hon. Evans Anozie  has lauded Governor Hope Uzodimma on the flag...

innonews - September 8, 2022 0
Queen Elizabeth II of the United Kingdom is dead. The Royal Family made the announcement in a terse statement...