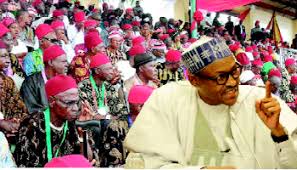 The group further advised that they begin now to reach out to other political blocs in order to realize their ambitions.

This was disclosed by Chuks Ibegbu, Deputy Publicity Secretary of Ohaneze in a statement on Tuesday.

He said the call is borne out of the need to get the zone poised for future political permutations.

Ohaneze reiterated it’s earlier stand that power should shift to the South East zone in 2023 despite strong signals from the South West chapter of the All Progressive Congress, APC, to vie for the Presidency.

” We call on all presidential materials in Igbo land to begin early enough to build networks with political blocs, groups and individuals in other zones of the country in preparation for future political permutations.

” Ohaneze believe and maintain that it’s just and fair after the North for power to shift to the South East.

“But power is not given. Contenders have to move out on time.Our call for any other political entity from any other zone aspiring to rule the nation after the North to think twice in the interest of the nation. We are asking all political parties in Nigeria to zone their Presidency to the South East zone at the appropriate time”

According to the group, a Nigerian President of Igbo extraction would address the developmental challenges of Nigeria and bring the best out of all Nigerians.

” Ohaneze has been in the forefront of calls for the South East geo political zone to occupy the number one office of the country after President Muhammadu Buhari in 2023.

innonews - August 27, 2018 0
The Igbo Union in Finland, the umbrella body of all the Igbo speaking people of Nigeria resident in Finland celebrated their annual new yam...