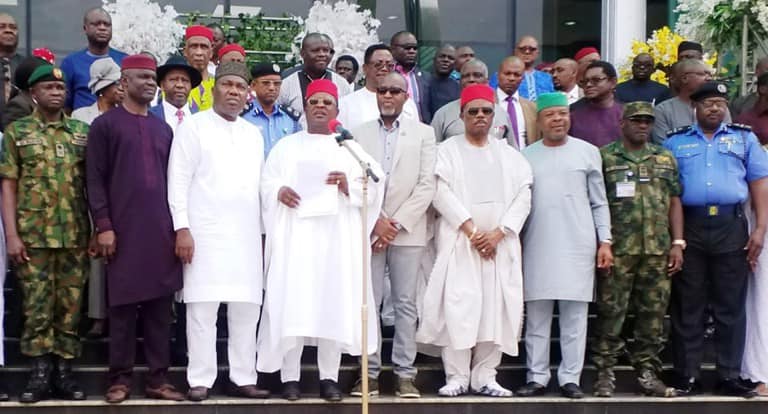 South East Governors met in Enugu, Saturday, where they took far reaching decisions to tackle security challenges in the region

They also resolved among other issues to begin a joint air operation aimed at flushing out bandits from all forests in the region just as they commended their Enugu State counterpart, Ifeanyi Ugwuanyi for setting up a Forest Guard in his State.

The Governors in a communique after a meeting also restricted inter state movements of herdsmen and their cattle including foot movement of cattle and herdsmen from communities to communities across farmlands in the region.

They urged security agencies in their various states to ensure its implementation.

The Sam Mbakwe International Cargo Airport in Imo State will temporarily serve as a alternative route for travelers in the region, as the Akanu Ibiam International Airport, Enugu undergoes reconstruction.

The Governors stated “The Sam Mbakwe Airport in Owerri, will be given face-lift to accommodate flights that would be diverted from Enugu Airport to Owerri Airport

Minister of Aviation, Hadi Serika who attended the meeting alongside President General of Ohaneze Ndi Igbo, John Nwodo, assured that the Akanu Ibiam International Airport runway will undergo repairs and other renovation works will be completed at the airport by December 2019.

While acknowledging the safety reasons given by the Aviation minister for the closure of Enugu airport, the governors stated that “we support him for closing the Akanu Ibiam International Airport, Enugu to save the lives of our people and our visitors”.

Part of the communique read “Palliative and security measures to be worked out between Federal Airport Authority, FAAN, Ministry of Aviation, South East State Governors, Security Agencies and FMoW to ease out inconveniences and make the routes safe through a joint committee

“South East Governors and security agencies to patrol all routes leading to where flights will be diverted from Enugu and also provide escorts to all travelers to the airports.

innonews - January 12, 2022 0
One of the reasons Senator Rochas Okorocha is almost a political leper in Imo state is because he went against the wishes...