Super Eagles coach, Gernot Rohr, has spoken why his team failed to beat Brazil in an international friendly match played in Singapore on Sunday.

He said the Brazilian national team had an advantage over his squad.

He said that Brazil players were used to the playing surface having faced Senegal three days before the meeting with Nigeria.

”They didn’t want to leave Singapore without beating an African team. They had a draw against Senegal, they had the advantage to know the pitch because they played already here four days ago,” Rohr told reporters.

”They also had the advantage to be used to the time difference because we arrived only two days ago and there’s was a big time difference between here and Europe even Nigeria, so it was not easy for our young team.”

Rohr had nothing but praise for his young team, especially the wingers, after holding the five-time world champions to a draw.

”We saw three new players, still young, the goalkeeper Maduka is 20, so we are working for the future.

”The team did very well. Brazil wanted to win the game, they scored very early in the second half and when they scored we had another 44 minutes to play, so it was not easy but with a lot of solidarity, fighting spirit and also counter attacks especially from our wingers, very strong today, we gave them problems,” he concluded. 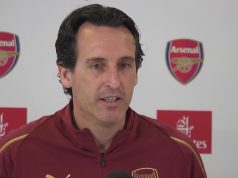 Wolves Manager May Take Over Emery’s Job At Arsenal