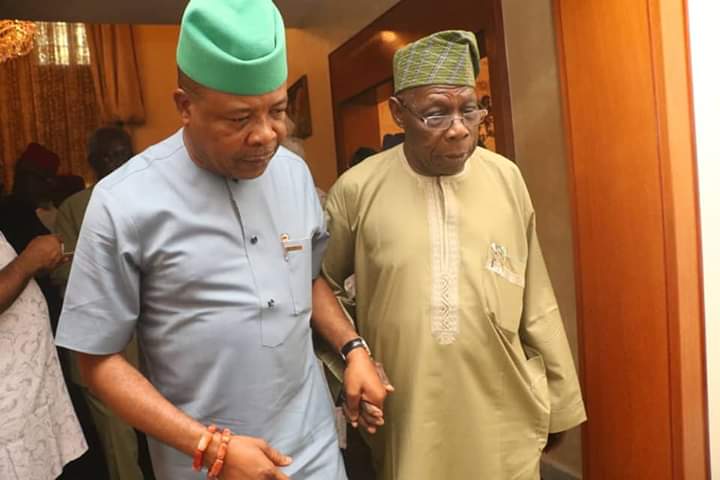 In the same vein, President General Ohaneze Ndi Igbo, Dr. John Nwodo, said with Ihedioha at the helm of affairs of the State, there is hope for a new beginning for Imo State and Igbo nation.

According to a statement by Governor Ihedioha’s Chief Press Secretary, Chibuike Onyeukwu,the duo made the declaration when they alongside other notable national leaders visited the Governor at his country home in Mbutu, in Aboh Mbaise local government area.

Chief Obasanjo and other notable leaders were in the state for the 90th birthday celebration of foremost nationalist and elder-statesman, Chief. Mbazuluike Amaechi which held in Owerri, Monday.

Obasanjo said, “Some of us have said, you have what it takes to make this State one of the leading states in our country”.

He congratulated Governor Ihedioha on his emergence as Governor of Imo State, adding that God will give him the courage and the strength to live up to expectations.

He said, “I believe that God who made you Governor of Imo State this time will give you the knowledge to do what needs to be done for Imo State, to make it one of the leading States in the country. While congratulating you on your electoral victory,  I pray the Almighty God to enable you to govern well.

“Having eminently served as Deputy Speaker of the House of Representatives, you are eminently qualified to make Imo State one of the best States.

He continued, “You have to bring to bear your wealth of knowledge and extensive contact to the service of Imo State and the South East”.

Hear him, “there is hope and a new beginning for Igbo nation with the quality of leadership provided by Governor Ihedioha”.

Continuing, “We have a Governor who is humble, experienced and who is not afraid to appoint people who posses more academic  accomplishments than him or those who have more exposure in governance than him.

“In Governor Ihedioha’s government,  you have former ministers serving as commissioners and as Chairmen of various committees.

In his response, Governor Emeka Ihedioha said his administration is on track in rebuilding Imo State, as his efforts are already yielding significant results

He assured that he will not disappoint, stating that his administration is focused to achieving its promises to the people of Imo State.

Oshiomole, Oyegun Bicker Over Loss Of Imo, Other States To PDP

innonews - June 7, 2019 0
National Chairman of the All Progressive Congress, APC, Adams Oshiomole and his predecessor, John Oyegun threw jabs at each other within the...

Okorocha: Killings In Plateau And Zamfara States Beyond Religion

innonews - July 2, 2018 0
Governor Rochas Okorocha has said that the killings in Plateau and Zamfara states were beyond religious killings stating that in some of the incidents...

Committee Reveals How LG Funds Are Siphoned Through Salary Padding In...

innonews - June 26, 2020 0
The Committee on verification of staff and salaries of the Unified local Government Councils in Imo State, have made shocking revelations on...