Home Sports Ighalo: Berbatov Tells Man Utd What To Do 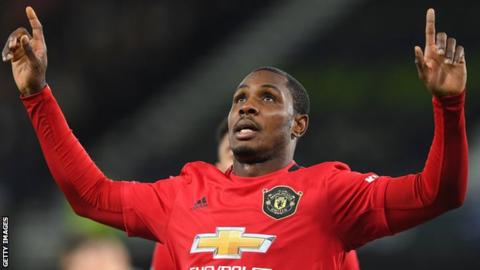 As Manchester united strive to keep Nigerian forward, Odion Ighalo, a former striker of the club, Dimitar Berbatov, has given an advise on how the club can keep the Nigerian at Old Tradford

Ighalo has been a success at Old Tradford since joining Manchester United on loan from Chinese clubside, Shanghai Shenhua, in January.

“United need to know what is happening with Odion Ighalo. If they know they will lose him, they need to find someone else to replace him,” Metro UK quoted Berbatov as saying.

“If they haven’t already found a replacement, they need to find someone quickly, but if he stays his teammates get on well with him and he has Premier League experience which is a big plus.

“For nine games, if they could come to an understanding and then he can go back, this would be the best option.

“If Ighalo goes, United should be allowed to get a replacement, they are in a great place going into this final part of the season, and they have a high chance of getting top four, but it will be challenging as no one wants to join for nine games.

“The best scenario is for them to agree to keep Ighalo for the few games. Otherwise, they will lose out on a player that can score goals in the race for the top four.”