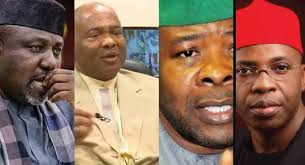 Hours after Imo State Governor, Hope Uzodinma accented to a bill repealing a law on payment of pensions and gratuities to former Governors, former Deputy Governors and former Speakers of the State House of Assembly, none of those affected have officially reacted to the development.

Governor Uzodinma after signing the bill into law at the Sam Mbakwe Exco chamber, Government House, Owerri Friday,  recalled that some former Governors of the State who benefited from the payments also earn huge salaries as Senator or as member of the House of Representatives.

Some associates of the former Governors when contacted for their reactions on the development declined comments, thus feuling speculations that they may have been consulted by Uzodinma before he repealed the law.

There was no Independent verification of his claims, but records obtained from National Bureau for Statistics, NBS indicates that some States in Nigeria who pay benefits to former Governors are neck deep into debt.

Drama As Olisa Metuh Appears In Court In A Stretcher (PHOTOS)

innonews - February 5, 2018 0
It was drama today at an Abuja Court when a former publicity Secretary of the Peoples Democratic Party, PDP, Olisa Metu appeared in court...

innonews - July 10, 2021 0
A group of analysts have differed on the suspension of six members of the Imo State House of Assemby.

innonews - February 5, 2018 0
Some militants who claimed to be loyal to slain militant Don Wayne on Monday, 5th February, 2017 surrendered their arms and weapons in Imo...