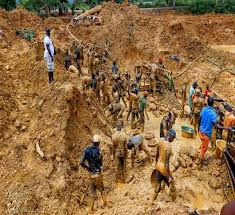 Illegal mining, borrow piting, has been banned within Owerri metropolis by the Imo State government.

This was part of the resolution of the of the State Executive Council meeting presided by Governor Hope Uzodinma held at the Executive chambers, Government House, Owerri.

He also said that the council noted with dismay the activities of criminals on some moribund Government owned industries such as Avutu Poultry Farm, Nsu Ceramic Tiles and many others that have been vandalized by criminals who carted away valuable government properties and equipment. Council regretted that the most worrisome aspect of it is that the criminals do so in collaboration with some people within the community and others who are supposed to protect such properties.

He, therefore, warned that Government is taking the matter seriously and plans to resuscitate such industries and bring them back to life, hence has decided that “anybody caught in the act must surely be dealt with very decisively.”