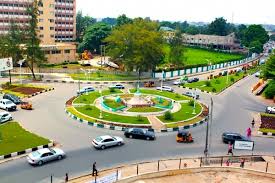 Despite relaxing the 24 hours curfew, security has been beefed up in Owerri, the Imo state capital, ostensibly to prevent looting of covid 19 palliatives ongoing in some parts of the country.

Covid 19 palliatives were reportedly looted in Ekiti, Cross River, Plateau, Kwara, and in other states of the federation. This took place barely few days after the Endsars protests.

For fear of such acts taking place in the state, security has been beefed up in the state capital, Owerri. Major roads were barricaded forcing motorists to seek alternative routes to get to their destinations.

Police patrol helicopter also hovered around city to have aerial view of the security situation in the state capiatl.

Heavy security presence was observed at International Conference Centre, ICC, where covid 19 palliatives are said to have been kept. It was also observed that most banks in the State capital were besieged by customers, who complained of skeletal services rendered by the banks.

During the Endsars protests in the state, violence had erupted in some areas. Local government headquarters of Mbaitoli, and Ehime Mbano were torched by arsonists. Some police stations in some parts of the state were also torched.