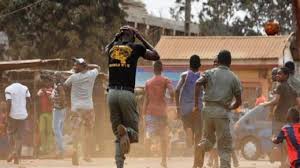 Orlu Local Government Area, a semi urban area  in Imo State, Monday witnessed heavy gun fire as security personnel made up of the military and the police went on rampage to avenge the death of their colleagues allegedly killed by men of the Eastern Security Network, ESN

The ESN is a security outfit set up by leader of Indigenous People of Biafra, IPOB,  Mazi Nnamdi Kanu. Residents of the area have fled the area as security personnel are said to have launched a massive man hunt of men of the ESN.

Some lives were said to have been lost. A resident said Orlu main town became impassable as the military took over the entire town early Monday morning.

Kanu had said the group was constituted to protect the South East region and the South South from Fulani herdsmen attacks and terrorists.

innonews - April 24, 2018 0
The most talked about housemate in BBNaija show looking charming in her gorgeously styled dress by Stylist Moses Ebite. BamBam has been everywhere doing various...

Subsidy: Much Ado About Nothing. BY RICHARD ODU

innonews - January 30, 2022 0
President Muhammadu Buhari rightly read the mood of the nation and took the decision to postpone the planned removal of the contentious...