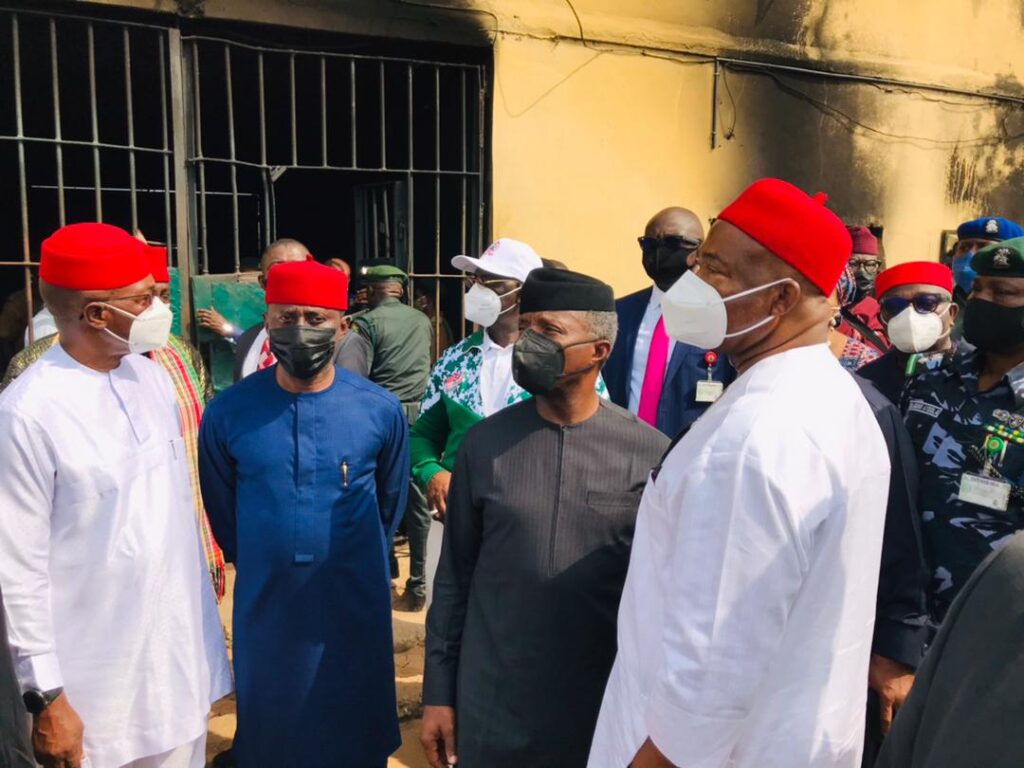 Vice President, Yemi Osinbajo has spoken on attacks on Police and Prison facilities in Owerri by unknown gunmen.

“Our dear city of Owerri had its peace and tranquillity shattered by heavily armed hoodlums who blasted open the doors of the correctional facility, facilitating the escape of well over 1,000 inmates; many of whom were dangerous criminals. They also attacked the police headquarters at “Shell Camp” burning several vehicles and even attempting to overtake the police armory, if not for the effective resistance of the police.

“An attack on the critical institutions of law enforcement, police stations and prisons is an attack on the safety, security and well being of the citizens.

“It is not merely an attack on law and order. It is a mindless attack on the people and the way of life of the people. When you attack police stations and free dangerous criminals, you put women, men, children and their possessions and livelihoods at risk.

“Whatever the motives of the perpetrators, the action is egregious and atrocious in the extreme and all men and women of goodwill must openly condemn this assault on the way of life of the good people of this State.

“Perhaps more than any other part of the country, this region has born witness to the terrible cost of lives, liberty and progress that is caused by conflict. It is in this beautiful land, that our county learned an enduring lesson on the futility of violence. But there are those who believe that to resolve issues and conflicts other than by violence is cowardliness.

“If the voices of their hatred prevail, we will experience the terrible and fruitless loss of life that violence begets. Our system is not perfect, and we can only seek to perfect it, indeed no earthly system is perfect, but what democracy and the institutions of democratic governance provide, are channels, however imperfect for seeking redress for injury, for peacefully addressing the problems that ail us.

innonews - February 2, 2022 0
By Onyekachi Eze Determined to effect a more viable and sound representation across the length and breadth of Nwangele/Nkwerre/Isu/Njaba...

innonews - January 13, 2018 0
*Call For More Enlightenment, Mobilization On CVR By: Eze Adiuku As the 2019 general elections draw near, people of Okigwe Local Government Are in Imo State...