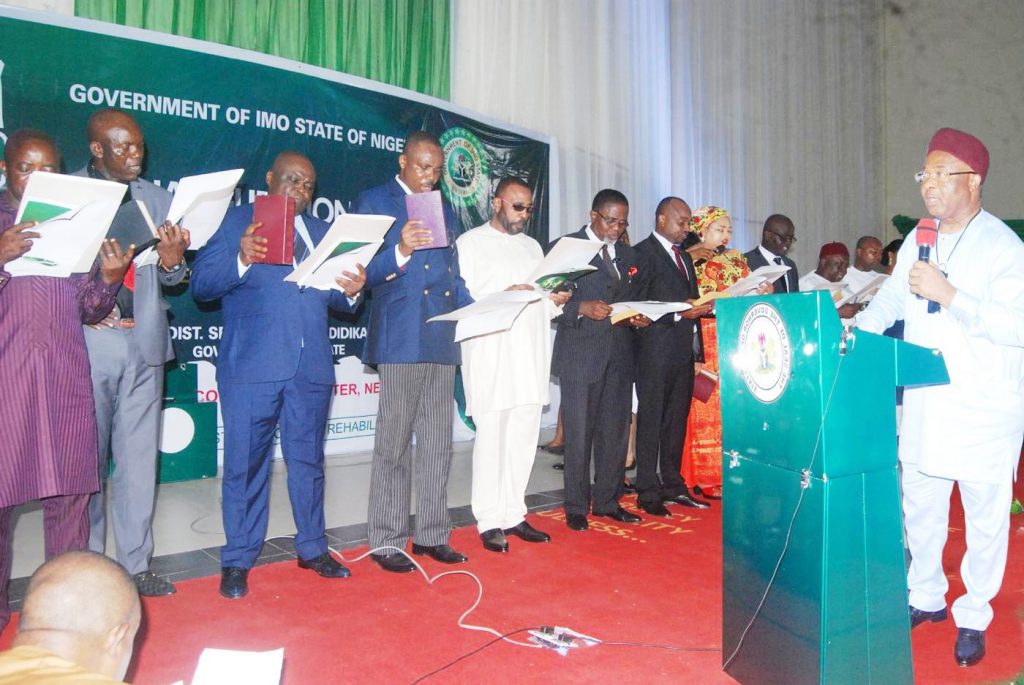 *Some Ex Commissioners May Be SAs

*Three SAs May Be Upgraded As Commissioners

Barely 24 hours after Governor Hope Uzodimma of Imo State sacked 20 0f his commissioners, in what appears a major tsunami that hit some of his appointees, a swift lobby for their replacement has intensified.

Though official sources said the 20 Commissioners were sacked in a bid to rejig the 3R administration for greater output and a normal routine exercise in government, there are clear indications that the Governor, wants to reshape his administration by bringing in more of technocrats and reduce the number of “core politicians”, who had dominated his former cabinet.

“The new set of Commissioners will comprise technocrats, some politicians from a certain political bloc in the APC in the State sympathetic to his administration and one or two PDP bigwigs, who had supported the Ihedioha administration, but have strongly aligned with Camp Hope.

“There are also some loyalists of the Governor who have been left out of the spoils of power, since this administration came on board. Such category of loyalists will be accommodated too” said a top level source who is in the know of the ongoing fierce lobbying.

Uzodimma had retained eight Commissioners in his first major cabinet overhauling after the Supreme Court had pronounced him governor of Imo State on January 14, 2020.

No reason was given for their retainership. Surprisingly, he showed the exit door to some of his trusted allies, such as Cyprain Akaolisa, former Justice Commissioner and Attorney General, and Lady Love Ineh, former Commissioner for Housing.

This newspaper was however informed that Akaolisa may return in the new look cabinet. Four of the sacked Commissioners are likely to be designated as Special Advisers, SAs, a source who does not want to be mentioned told INNONEWS.

There are speculations that three Special Advisers, SAs may also be “upgraded” to Commissioners in the new look cabinet.

According to a statement by Media Adviser to the Governor, Marcel Oguwuike,  he said “ Governor Uzodimma thanked the affected Commissioners and assured them that they will still be found relevant in other areas if eventually they did not make the new cabinet he said will be reconstituted soon”

It was however mixed feelings for the sacked Commissioners, as they returned their official vehicles immediately they were relived of their appointments.

Recall that INNONEWS had last week published an exclusive report titled “Has Uzodimma Lost Faith In His Appointees”, which detailed moves of the Governor to clear out some of his officials.

innonews - February 20, 2018 0
PRESS RELEASE Chief Tony Chukwu, one of the prominent APC leaders in the South East has advised Imo citizens both at home and in the...

innonews - December 25, 2017 0
Senator Representing Owerri zone in the senate, Senator Samuel Anyanwu said he decided to seek  re- election for the second time as senator in...