Home LEAD STORIES Minister Flags Off Scaling Up Of NGHSFP 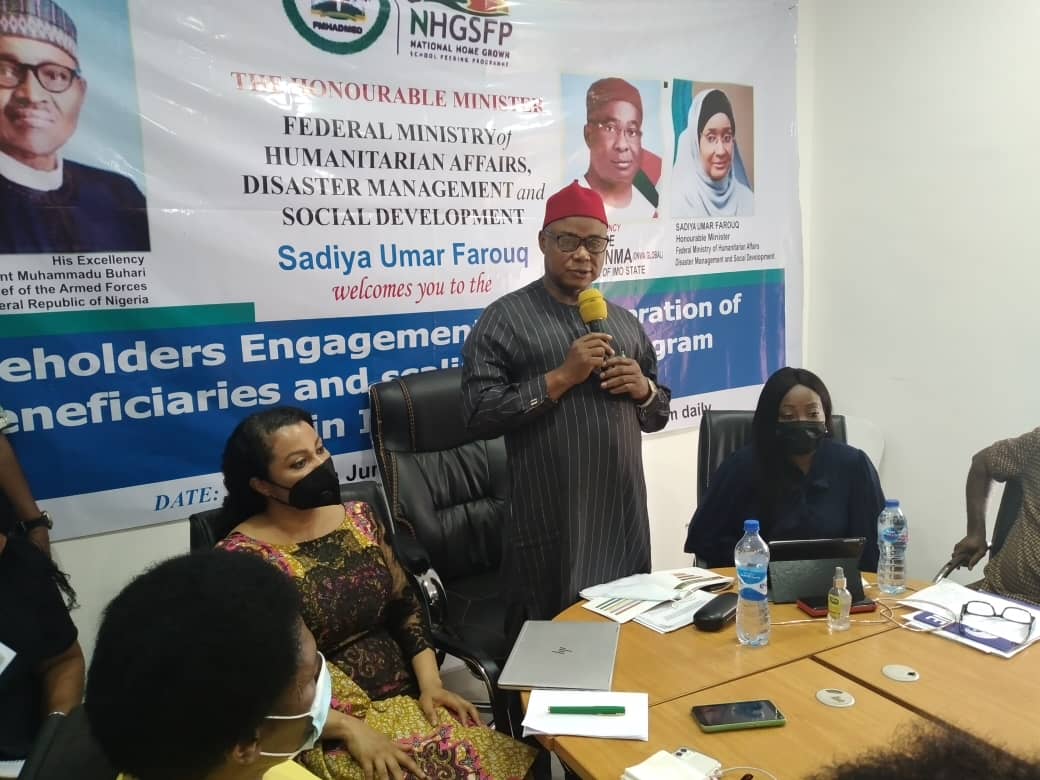 The minister made this known at a stakeholders’ meeting for the flag off of the Enumeration of Beneficiaries and Scaling Up of the National Home Grown School Feeding programme held at the Imo Sustainable Development Goal (SDG) office on Thursday.

Farouq noted that over nine million pupils currently benefit from the Federal Government one free nutritious meal a day during school term nationwide, but that the ministry now has the mandate to reach an additional five million pupils by 2023 to total 14 million.

Represented by Mr Ralph Obi, Director of Planning, Research and Statistics in the ministry, Farouq said the NHGSFP was designed as a multi-faceted intervention to drive school enrollment up, boost nutrition of pupils and support local production of food.

She said it was also to encourage employment, income generation and provision of one nutritious meal to all pupils in public primary schools in class 1 to class 3 to achieve the objective.

She said the President Muhammadu Buhari led administration launched the implementation of the National Social Investment Programme (NSIP) made up of four unique clusters to provide the maximum impact.

Farouq listed the clusters as the N-Power, aimed at building capacity, skills and competence among job seekers in the country, the Conditional Cash Transfer (CCT) aimed at reducing the vulnerability of poor homes by providing cash transfer of N5,000, the NHGSFP and the Government Enterprise Empowerment Programme (GEEP) meant to advance micro soft loans with no collateral or interest charges.

“All these were deliberately designed to specifically target sections of vulnerable Nigerians that include youths, elderly persons, widows, poorest of the poor children and micro businesses persons.

“So, today, we are here in Imo State on the strength of our partnership and mutual recognition of the need to do more on the NHGSFP, to bring more Nigerians under the umbrella of the government’s social protection mechanism, to look at scaling up the number of pupils benefitting from the programme as directed by President Buhari, ” she said.

The minister, therefore, urged the stakeholders to work in synergy to ensure that the aim of NHGSFP was achieved.

The Focal Person NSIP in Imo and Special Adviser to the governor on SDGs, Mrs Christina Ude said the clusters were intentionally created to touch the lives of millions of Nigerians with indices on the reduction of hunger and malnutrition.

She said it was also to generate employment for the teeming unemployed youths, saying that as the focal person, she serves as the link between the FG and the state government to achieve the aim of the programme.

“We are here today to scale up and do more on the NHGSFP to bring more Nigerians under the umbrella of social protection mechanism as directed by the president,” she said.

Ude called on the stakeholders in the state to work in synergy to acieve the purpose for which the programme was created.

The state Commissioner for Finance and Coordinating Economy, Dr Doris Uzoka-Anite observed that COVID-19 pandemic affected a lot of people and various sectors of the economy negatively.

She said the scale up of the home grown feeding programme was an additional intervention to get more people to benefit.

Uzoka-Anite said the aim was equally to guide against manutrition in children of poor families adding “when children eat well they grow well and are stronger.”

The State Director, National Orientation Agency(NOA) Mr Nazzy Njoku, said the agency was already patnering with the ministry towards the success of the programme.

He said continous awareness of the programme was being created in communities and expressed optimism that Imo would record huge success in the programme.

Njoku said that the task team created by the state government for the programme had been working round the clock and ready to take off for collection of credible data for effective mangement of the home grown school feeding exercise.

She commended the focal person for a good work done in preparing the team for the programme, she said was targeted at alleviating poverty in the state and the nation at large.

Our correspondent reports that the stakeholders are the Ministry of Education, NOA, National Population Commission, National Youth Service Corps, and the state Education Boards which are jointly working to verify the existing numbers of beneficiaries and update the records for effectiveness, transparency and accountability.

innonews - September 29, 2017 0
A good number of senior citizens in Imo State are furious over bounced cheques they received from the Imo State government. Newspaper reports in Owerri...

innonews - March 12, 2020 0
Time was when, if it was published in the newspaper, radio or television, it was authentic.  Anyone who got a piece of information from...

innonews - April 13, 2018 0
Former Secretary to Imo State Government and Chieftain of the Peoples Democratic Party (PDP) has described reports both in the newspapers and social media,...

innonews - December 21, 2017 0
The trouble rocking the Independent Newspaper Publishers Association, INPA in Imo State may have reached a crescendo with a faction of the group condemning...