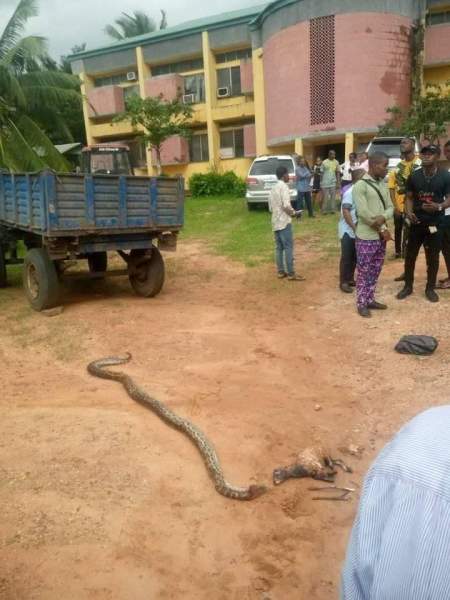 The Chief Priest of Owerre (Onye Ishi Ala), Reginald Ejiogu on Monday, stormed the Alvan Ikoku Federal College of Education, AIFCE, Owerri, with an ‘Omu’ signaling danger ahead for students and management of the citadel of learning, over the killing of an ancestral python, called Eke Nworie

Recently students of the institution had killed the gigantic python, an act considered a sacrilege, within the norms and tradition of Owerre.

The Chief Priest had emphasized on the need for cleansing, to avert occurrence of strange incidents over the murder of the ancestral python.

INNONEWS was informed that a similar incident had occured between 1979-1980 during the construction of Wethedral/Christ Church Road, Owerri, when some foreign contractors killed the “Eke Ala Owerre” python, the forebearer of the “Eke Nworie” python killed by students of Alvan.

An attendant to the Chief Priest told this newspaper “When the foreign contractors killed the Eke Ala Owerre python, strange things began to occur. There were mysterious deaths among the contractors. There were breakdown of their machines.

“At a stage, they abandoned the road project, until they were cleansed by the then Chief Priest of Owerre, (Onye Ishi Ala Owerre), Late Eke Igwe Nwoduo Ejiogu

He continued “The management of ALVAN think this is a joke. This is a spiritual matter, and they seem not to understand the gravity of killing that ancestral python

“The consequences are monumental, devastating because the land has been descreated. And it must be cleansed immediately.

“You do not kill Eke Nworie python. It is not done. It is a sacrilege with serious consequences that are just to terrible to mention.

“This is why the Chief Priest had to come here today (at Alvan) to put this ‘Omu’ which signifies danger ahead. No one should blame us if strange things begin to happen.

“Only the Chief Priest, no one else, is spiritually fit to do the cleansing and not anyone else” he stated.