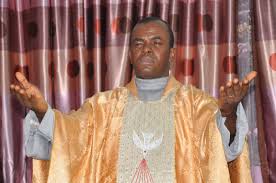 Worse things will happen in Nigeria if God does not intervene in Nigeria’s current situation.

This was revealed by fiery critic, and Spiritual Director, Adoration Ministries, Enugu, Rev Fr. Ejike Mbaka while addressing his members at a homily.

Mbaka said the attack on the Nigeria Defence Academy, NDA, Afaka, was the beginning of what will befall Nigeria if President Muhammadu Buhari led APC government fails to change.

He said the leader of the Indigenous People of Biafra, IPOB, Mazi Nnamdi Kanu, and Yoruba nation agitator, Sunday Igboho, are not the problems of Nigeria.

He noted that Nigeria is still experiencing security challenges despite the incarceration of Kanu and Igboho.

He wondered if Kanu was responsible for the attack on the NDA, stressing that the incident was elementary compared to what would happen if the federal government failed to take adequate steps.

“Did you not hear that bandits entered into our most secured place in this country?. Nigerian Defence Academy (NDA), the impenetrable place in Nigeria and killed some military officers

“Will the arrest of Nnamdi Kanu solve any problem. Will it stop any agitation? Now the attack on the NDA, is it Nnamdi Kanu now?. Is it not better he is released?

“Since he is still under custody and NDA could be perforated, violated and mesmerished, what is the hope of this country if it can happen in Nigeria Defence Academy? Where else is safe?

“As for, two people arrested in the foreign countries, Sunday Igboho was arrested, Nnamdi Kanu was arrested, Sunday was held down there, Nnamdi Kanu was brought to Nigeria. Now let me ask you question, are you not imagining the velocity of what is going to happen in this country if the entire men of God, prophets of God- real prophets will not stand with Elijah to give assignments to the prophets of Baal, if the prophets did not experience the power of Elohim, if they don’t experience the action of the Adonai they will kill Elijah; but they saw there is God who resides on his altar”

innonews - April 19, 2018 0
The member representing Owerri Federal Constituency, Hon Ezenwa Onyewuchi has kicked against the wanton destruction of sources of livelihood and forceful eviction of innocent...

innonews - December 12, 2018 0
As the 2019 governorship election comes close, the political dynamics in Imo State has continued to change. This...

Temple Of Solomon Under The City Of Owerri- Njemanze