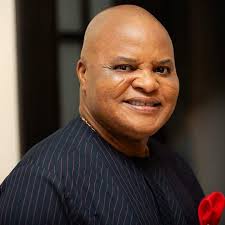 The appointment of Senator Ifeanyi Araraume as Chairman, Board of Management, Nigeria National Petroleum Corporation, NNPC by President Muhammadu Buhari, has generated ripples in Imo State.

Several interpretations have been tagged on the appointment and several analysts in the State contend that Senator Araraume’s appointment was mainly influenced by political considerations and factors.

These interpretations are further fueled by the division in the All Progressive Congress, APC, in Imo State, where former governor of Imo State, Senator Rochas Okorocha and Senator Ifeanyi Araraume, are at cross roads with Governor Hope Uzodimma.

Thus, Araraume’s appointment is construed by some politicians, particularly those sympathetic to the Senator in the State, as a plus for those vertically opposed to Governor Hope Uzodimma.

“NNPC is a not a small fish. And we know how these appointments come by.

“Anyone who sits on the Board of the NNPC must have earned the overwhelming confidence of Mr.President.

“Aside this, the NNPC is a cash cow and only those who are either inner members of the president’s circle or trusted allies get such appointments” said Gabriel Onyekuru, a political analyst who spoke to INNONEWS in Owerri.

Some political observers argued that the appointment is an indication, that President Muhammadu Buhari, may intend using the appointment to acomodate other allies in the party.

Aside Senator Araraume, Senator Margaret Chuba Okadigbo, wife of late former Senate President and one of Buhari’s allies in his journey to the Presidency, Chuba Okadigbo was also appointed member of the Board.

Mr Onyema Nwachukwu, a chieftain of the APC in Imo State said”This is another way of dispensing political patronage to trusted allies of the President and key party men.

“This is not the first time, a chieftain of the party and from the South East, is being appointed by the President to head a major Federal government agency.

“And the appointment of Araraume is one of those big patronages being dispensed by the President to his trusted allies. And it is the perogative of Mr.President to dispense such patronage whosoever he desires.

The appointment seems to have put brakes on speculations that Senator Araraume and former governor Rochas Okorocha were planning to quit the All Progressive Congress, APC for the Peoples Democratic Party, PDP.

Araraume had vied for Okigwe Senate seat but lost the party’s ticket to Frank Ibezim, who was candidate of Governor Hope Uzodimma.

Araraume and Okorocha had also boycotted the APC membership and Revalidation Exercise, increasing fears that they are on their way to the PDP

With Araraume’s appointment, it means he is going nowhere and if Okorocha decides to leave the APC for the PDP as speculated , he would now do so on his own.

But if the two remain in tango, then it implies that they have been “settled” in the APC.

A top member of the APC in Imo State who spoke on condition of anonymity said Araraume has been “settled”, revealing that a serving Minister from the South South, and one of Buhari’s trusted allies contributed to influence Senator Araraume’s appointment.

“Araraume has been settled, he cannot afford to stay in opposition. With his appointment as NNPC Board Chairman, his migration out of the APC is over.

“He only used stories of his plan to leave the APC for the PDP as a bait to be settled after losing the Okigwe Senatorial seat.

Is Abuja Changing Power Base In Imo?

Another school of thought contend that the appointment of Senator Ifeanyi Araraume as NNPC Board Chair, is an indication that Abuja could be re aligning with new forces in the APC in Imo State.

They contend that President Buhari’s “I will be careful with future invitations” comment, he made in Owerri, when he was hosted Governor Hope Uzodimma, is an indication that all is not well.

A week after Mr.President’s visit to the State, former governor Rochas Okorocha, an ally of Senator Araraume, held a private meeting with the President.

“This shows something is not adding up.

“If Governor Uzodimma truly has the ears of the President, Senator Araraume would not have been appointed to head a gold mine such as NNPC” said Okechukwu Igwe, a political observer.

This newspaper observed that Senator Araraume’s appointment may have also rattled and jolted the camp of Governor Uzodimma.

But, the Global Association of Concerned Imo Youths, GACIY, a pro Uzodimma group faulted these claims.

In a statement in Owerri, signed by Mr. Collins Ughalaa, the convener of the group said it is unfortunate that “some misguided elements want to convince Imo people that Araraume’s new found employment is a set back for Governor Hope Uzodimma; that his new gig is a signal that the President is “unhappy with what he saw” when he visited Imo at the instance of Governor Uzodimma; that this appointment is infact dividend of a recent private visit of Senator Okorocha to President Buhari”

The group argued that “the appointment rather vindicates Governor Hope Uzodimma. It is an outcome, the first major fruit of Uzodinma’s intentional engagement with the centre. It shows that Mr.President took to heart the counsel of the Igbo leaders who dined with him during his September 9 visit to Imo State at the instance of Governor Hope Uzodimma”

Details Of Ihedioha’s Suit Against Uzodinma At Supreme Court Emerge

innonews - February 6, 2020 0
By: Ralph Ejimkonye, Abuja The Supreme Court has been asked by former Governor of Imo State, Emeka Ihedioha to...

innonews - January 2, 2018 0
President Muhammadu Buhari's commitment towards infrastructural development of the South East, job creation and empowerment programmes were some of the numerous factors which led...

Imo Guber 2019 And The Politics Of Providence. PROF PROTUS NATHAN...

innonews - September 13, 2018 0
It is my profound philosophy that the will of providence is deep. It’s the bucket we bring to it that is small. In the...

‘All C Of Os Issued From Okpara To Mbakwe Must Be...

innonews - May 8, 2020 0
The Imo State governor, Hope Uzodinma has signed into law land use charges, making far reaching changes to land acquisition and...