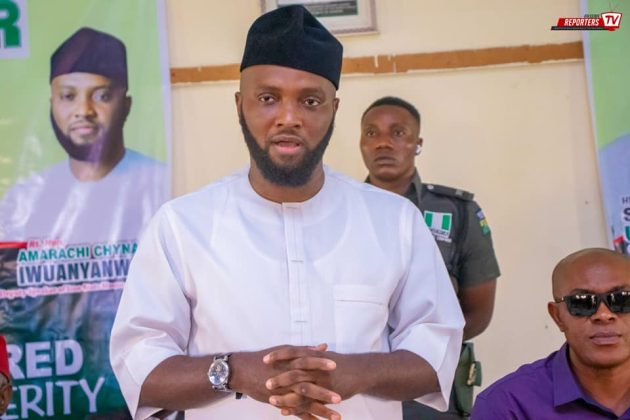 INNONEWS was informed that the removal of Iwuanyanwu allegedly had the finger prints of the Speaker, Paul Emeziem, who perhparps acted in cahoots with powerful forces in government to oust the Deputy Speaker.

This allegation has been roundly denied by the Speaker, who said he only carried out the decision of majority of House members.

Another account stated that the former Deputy Speaker allegedly visited a foe of the present governor in Abuja which made him a target for ostracision. There is no independent verification of this particular claim.

However, an ally of the former Deputy Speaker, Mr.Ogu Bundu Nwadike, in an article forwarded to this newspaper pointedly accused the Speaker for Iwuanyanwu’s fall from grace to grass.

He wrote “Our findings, which will be elaborated on in subsequent short essays, proved that the purported impeachment of the Deputy Speaker was a charade orchestrated and perpetrated by enemies within and fifth columnists, not surprisingly led by the adequately compromised Speaker, Paul Emeziem”

“A respondent among the House members, who spoke on condition of anonymity confided in us that the Speaker was bribed with $300,000 or N168 million by power mongers in the leadership echelon of the PDP in Imo State. And their summary aim is allegedly to commence the impeachment process against the Governor, Distinguished Senator Hope Uzodimma before the end of the year, 2021”

Amara has been said to be a dependable ally of the Governor, as varying information point to the fact that his impeachment could have emanated from unseen quarters.

But the Speaker, Paul Emeziem, whom accusing fingers for Iwuanyanwu’s ordeal point to, has denied his involvement in the sack of his Deputy.

In a statement signed by his Chief Press Secretary, Collins Osuji, he described the allegations as “mischievous and malicious”

Part of the statement read “the report that the Speaker induced the members with N10 million naira to facilitate Iwuanyanwu’s removal was not only laughable, misleading but childish.

“Also, that the Speaker and the members were bought over by some known politicians in the State to carry out the decision and by extension destabilize the state government led by His Excellency, Dist Senator Hope Uzodimma was nowhere near the truth and should totally be disregarded” part of the statement read.

innonews - July 4, 2017 0
Lionel Messi has said he wants four Barcelona players sold as a precondition for him to sign a new contract with the La Liga...

Ihedioha Gives Reasons Why TSA Was Introduced In Imo

innonews - July 13, 2019 0
BY: IKENNA ORIOHA The deep fianacial mess Imo State was plunged into by the past administration were some of...