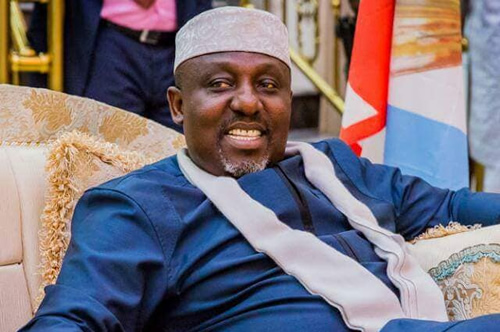 Former Governor of Imo State, Senator Rochas Okorocha, who was to be arraigned at the Federal High court, Abuja on Tuesday, February 22, was stalled over non service of court documents.

Okorocha, a senator who represents Imo West in the Senate, was to be docked by the Economic and Financial Crimes Commission, EFCC on a 17 count criminal charge

When the matter was called up in court on Tuesday, all the other defendants were present in court, except the senator.

Prosecution Counsel, Cosmas Ugwu,  informed the court that the 1st defendant, Rochas Okorocha, was not in court because he had not been served with the charge.

“My lord, the matter would have been for the arraignment of the defendants, but the 1st defendant is not in court.

“Effecting service on him has been difficult, but we have served all other defendants

“We need another date to enable us effect service on the 1st defendant” the EFCC lawyer told the court.

The trial Judge, Justice Inyang Ekwo, adjourned the matter to March 28, by 12 noon for arraignment.

The EFCC had dragged Okorocha to court over allegations of conspiracy with his cronies and five companies to fritter the sum of N2.9 billion naira public funds belonging to the Imo State government when he wad Imo State governor from 2011- 2019.

innonews - September 10, 2018 0
A new Rector has been appointed by the Federal Polytechnic, Nekede, Owerri. He is Rev. Dr. Engr. Micheal Arimanwa. He is of the Electronic Electrical...

Rohr To Undergo Refresher Course At Bayern Munich After AFCON-...

innonews - September 21, 2017 0
President Muhammadu Buhari is expected to leave New York, USA for London, UK where he is to see his doctors. The Nigerian leader had addressed...