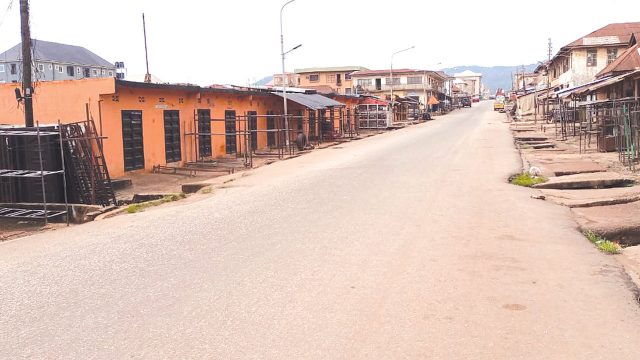 Residents of Owerri, Imo State capital, have groaned over the three days sit at home in the state, which paralyzed commercial and social activities.

The 3 days sit-at- home, which began on Monday, May 16 lasted up to Wednesday, May 18, when the leader of the Indigenous People Of Biafra, IPOB, Mazi Nnamdi Kanu was taken to court.

It was observed that during the 3 days sit at home, schools, markets and shops were completely closed, as major roads were deserted.

Major markets such as Ekeukwu Owerri and Relief markets in the state capital remained shut, as banks, including POS operators stayed off the streets during the three days.

A shop owner at the popular Douglas road, Owerri, Mr. Ifeanyi Obiagu,  told our correspondent that the sit at home in the state capital made him to incur huge losses because he did not open his shop for business

“Staying at home for three days really affected my electronics business. This is the first time we have had such a long sit at home. And i must tell you, it affected my business.

A POS operator at Tetlow road, who says her name is Amaka, said the the 3 days sit at home was not good for her business.

“I could not come to do business because I was afraid I could be attacked. The streets were deserted and I was scared if hoodlums would not take the opportunity to attack me and steal my money” she said

Our correspondent gathered that in most parts of the state, idle youths took to the streets to play football, while a School proprietress at Egbu in Owerri North LGA, said she sent out text messages to parents and guardians not to bring their wards to school during the period.

Uche Nwosu Reveals How He Nearly Sought For Review At Supreme...

innonews - February 20, 2020 0
Former Chief Of Staff, Imo Government House, Owerri, Uche Nwosu, has revealed how he almost sought for a review of the Supreme...