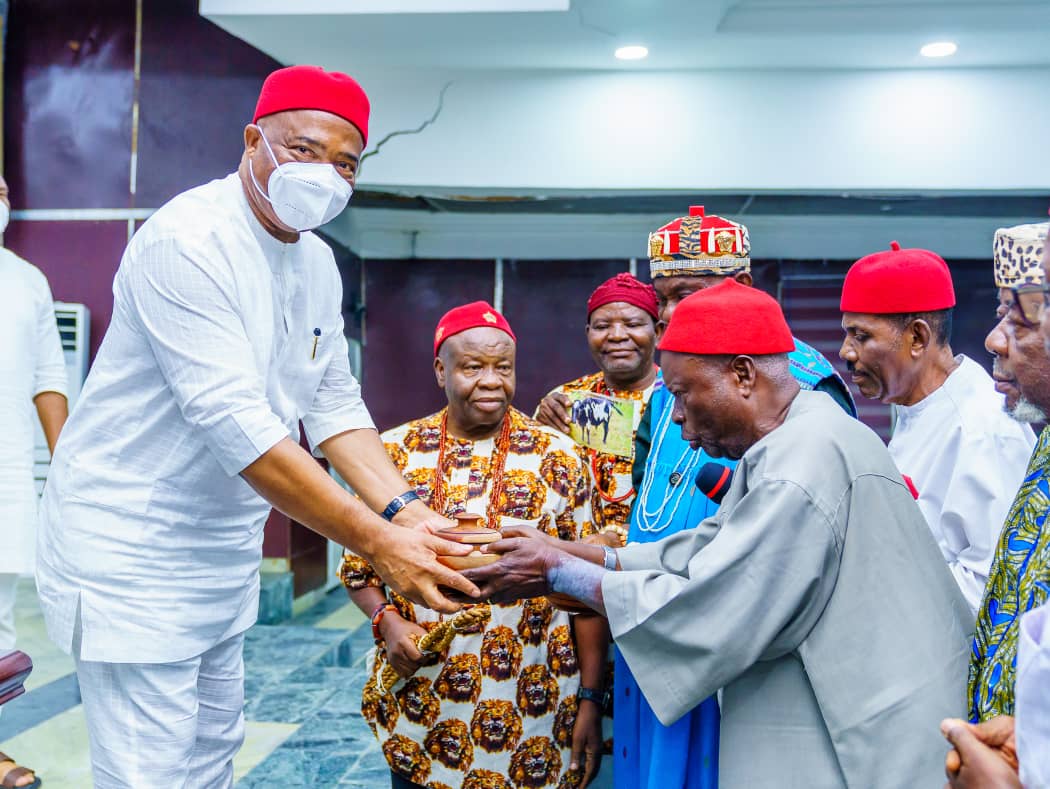 Leaders from Okigwe senatorial zone in Imo State, particularly those from Otanzu and Otanchara Clan, and Onuimo Local Government Area, have reaffirmed their commitment to the support of the Government of Governor Hope Uzodimma which they said is serving Imo State selflessly.

Their resolve to support the Government of Uzodimma was the core message the leaders brought to the Governor at the weekend when they paid a solidarity visit to him at the Government House Owerri.

Led by former Deputy Governor of Imo State, Eng. Ebere Udeagu, three former Speakers – Rt. Hon. Dr. Maxwell Duru, Rt Hon Dr. Acho Ihim and Rt. Hon. Paul Emeziem -, Chief John Enyogasi (OK2000), Hon Patrick Ndubueze among others, the leaders told Governor Uzodimma that they are impressed with his policy on development and would not want him to slow down on the pace he has adopted.

It was also an opportunity for the leaders to appreciate Governor Uzodimma for finding one of them, Hon Ndubueze, worthy of representating the Okigwe senatorial zone ( Imo North) at the Senate as the APC candidate after many years of “marginalisation.”

In their address read by Rt. Hon. Duru, they said they also came to appreciate the Governor for his achievement in the area of road infrastructure development, recovery of Imo State University at Ogboko and the landed property that were cornered by some individuals and their cronies.

They said the Governor’s resilience, doggedness and purposeful leadership that made it possible for him to weather all the daunting challenges before him were second to none and needed to be acknowledged and appreciated.

The leaders,  therefore, seized the opportunity to call on Imo people, especially those still in the trenches and perpretrating violence against the State to sheathe their sword and join the Governor to make Imo better.

They expressed hope that the aspiration of Hon.Ndubueze and the hope of Otanzu and Otanchara Clan in particular where he comes from will come to reality, even as they pledged that their people will continue to support the Governor.

‘’In the first quarter of 2023 we will come back to say thank you when our brother and son must have been elected Senator for Imo North and again by October of the same year to express a bigger thanks through the ballot box on the election of the Governor for the second tenure.”

A youth leader, Mr Chukwuemeka Duru on behalf of the youths from the area  lauded the Governor for his landmark achievements, and used the opportunity to solicit the Governor’s intervention in restoring electricity that has eluded them for more than 20 years.

Also, the Woman leader,  Mrs. Olivia Ijeomah expressed the unalloyed loyalty, support and followership of the women of the Clan to the Governor and the 3R administration in Imo State.

Governor Uzodimma in his response urged the leaders to put together a technical team that will work out a development plan, taking into account a succession arrangement that will bring to the fore, the intetest of the youths.

The Governor thanked them for their kind words about their brother, Hon. Ndubueze as the Imo North Senatorial Candidate for APC in the 2023 general elections and urged them to work to deliver him.

The Governor reminded them that Hon. Ndubueze’s choice was based on the subsisting politics of justice and equity in Okigwe and that in the current situation, equity and justice demanded that “Otanzu and Otanchara Clan deserves a slot.”

“People say you don’t have voters but I told them you have God,” the Governor said and expressed happiness that “Imo people are beginning to see that the best way of life is that they need justice.”

He acknowledged that “Hon Ndubueze is credible and his people want him but the intrigues of politics have not allowed him to scale through.”

He said though Ndubueze had been nominated for the position, “but it is the responsibility of the leaders of OT-OT to reach out to the other parts of the zone that have the majority of the votes to support and elect him,” assuring that his responsibility as the leader of APC in Imo State is to protect the votes of all APC candidates.

Making reference to the elders and the aged ones from the zone and clan the Governor advised that they should fashion out a proper succession plan for replacement that is credible and dependable.

As the election year draws closer the Governor harped on the need to “vote for God fearing people who will remember their people after being elected and not those who will shut their doors and gates against their people on assumption of office.”

On the ongoing reconstruction work on Owerri-Okigwe road after the inauguration of the first phase by Mr. President, the Governor assured the leaders that “in the next 90 days the road from Owerri/Okigwe will get to Okigwe.”

He also promised to find out why there has not been electricity in the area in over 20 years.

The Deputy Governor of Imo State,Prof. Placid Njoku, the Speaker Imo State House of Assembly,  Rt. Hon. Barr. Kennedy Ibe, the Secretary to the State Government, Chief Cosmas Iwu, the Chief of Staff to the Governor, Barr Nnamdi Anyaehie and other members of the State Expanded Executive Council joined the Governor to receive the visitors.

innonews - August 7, 2021 0
Dr. Goodwin Maduka, has emerged the governorship candidate of the Accord party, for the Anambra governorship election. Maduka emerged...

innonews - April 10, 2020 0
The South East ranked least in the list of Vulnerable Nigerians as the Federal Government Friday, published full list of...

innonews - June 11, 2018 0
Following the slapping of a Journalist in Imo State by  member representing Ohaji/Egbema state constituency at the Imo State House of Assembly, Hon Emma...