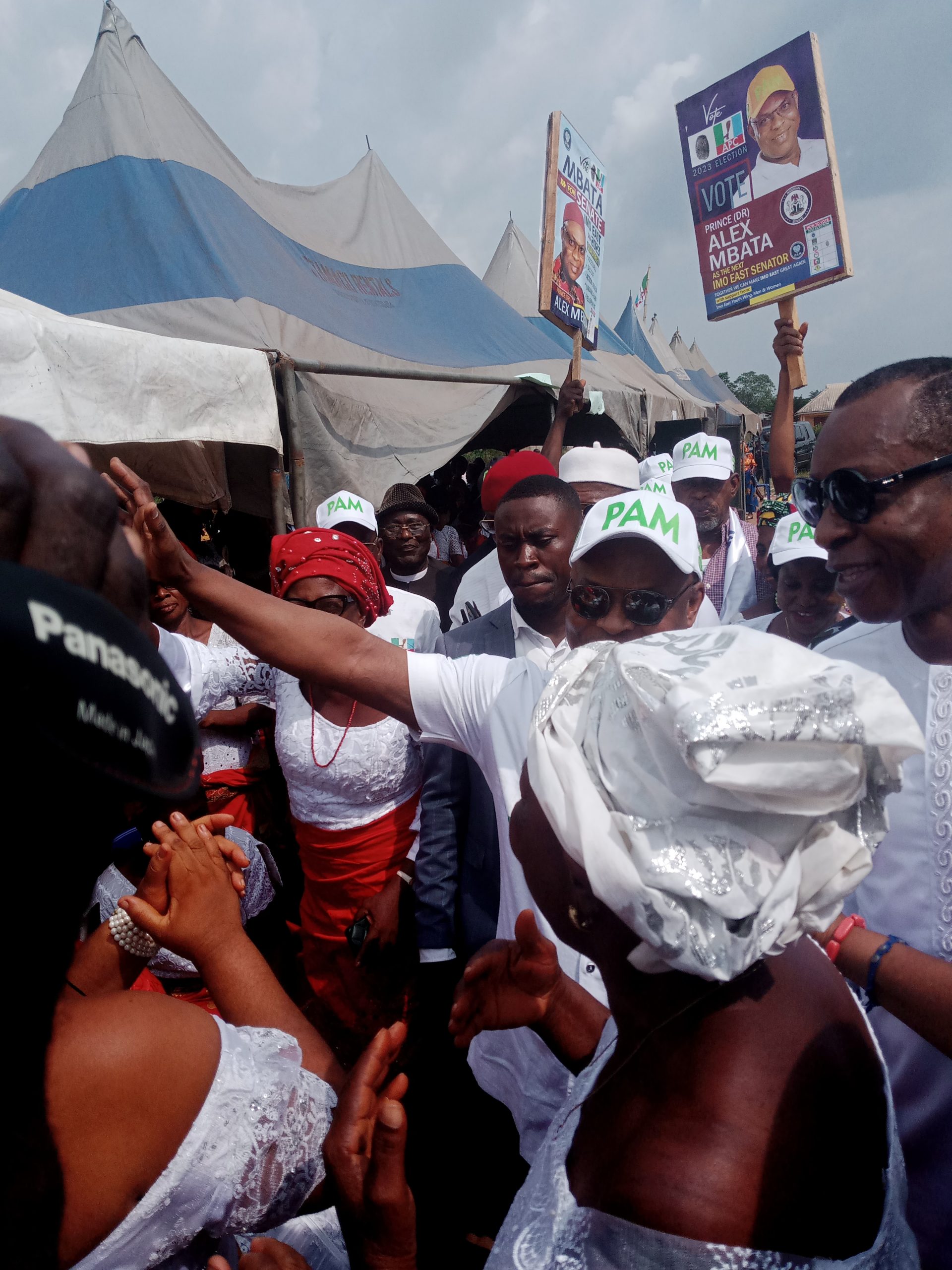 The All Progressives Congress APC, Imo East Senatorial candidate, Prince Alex Mbata, has flagged off his campaign geared towards securing victory for the party in the 2023 elections.

Mbata, widely tipped to win the race, based on his surging popularity across Owerri zone, spoke to a mammoth crowd at his Obube/Ulakwo/Agbala, (OAU) ward in Owerri North LGA, who openly endorsed his senatorial bid

Mbata in his speech to the crowd, vowed to effectively represent the good people of Owerri, stating that the zone will witness wave of fresh air when he and other APC candidates are elected into office during the 2023 general elections.

The business mogul said the people of the zone will not be disappointed with his representation, vowing to contribute to the building of roads, schools and hospitals, which he noted, would contribute significantly to the infrastructural development of the zone.

He said his decision to kick start his campaign from his ward, OAU, is to seek the blessings of his people.

“I have come to seek your blessings. The way you have turned out for this rally is an indication of your overflowing and outpouring of support for me. Our traditional rulers had blessed me yesterday and I m happy that our people have come in their numbers to support their son” he stated.

“I m your son and I have come to ask you all to join me in this journey and together we shall be successful.

“Come February 25, 2023, by the special grace of God, INEC shall declare me and other APC candidates winner of Owerri zone Senate race and other elective positions” Mbata said.

He enumerated the giant strides of Governor Hope Uzodimma of Imo State, stressing that he is going to the Senate to compliment the efforts of the governor in the state.

“I m going to the senate to compliment the good works of His Excellency, the governor of Imo State, Senator Hope Uzodimma” he said.

Several speakers at the event such as a chieftain of the APC in Imo State and Chairman, Prince Alex Mbata Divine Movement, PAMDM Campaign Council, Chief Henry Njoku (Harritex), implored the people of OAU, to vote massively for their son, Prince Alex Mbata (PAM) at senatorial election. He said Mbata has demonstrated uncommon passion for the people of the zone, and remains the best for the senate seat.

APC House of Reps Candidate for Owerri Federal Constituency, Hon C.DB Williams, in his brief remarks,  also drummed support for Mbata, himself and other APC candidates, calling on the people of OAU to vote massively for all APC candidates during the February 25 elections.

innonews - August 17, 2022 0
Hope Uzodimma, governor of Imo State, has vowed that his administration will continue to rid the state of criminals and bandits.

innonews - May 15, 2019 0
Details of the long drawn drama in the Imo State House of Assembly came to a head on Thursday with the suspension of the Speaker, Hon.Acho Ihim.

10 Days To Buhari’s Visit To Imo: APC Moves To Suspend...