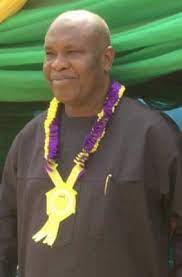 Dr. Obi was one time Chairman of the Peoples Democratic Party, PDP in Imo State.

In a statement in Owerri, Ogunewe described the Late Alex Obi as a seasoned and experienced politician, who made an impact in the political landscape in the state and proved his mettle in the medical profession.

“Dr Obi was a respected political titan and bulldozer, whose sagacity, acumen and exceptional political skills will be missed.

“He passed away at a period his vast political experience is indeed, needed in the State and would be remembered for his enormous contributions to the progress and development of his community, the Mbaise Nation and to the State in general

“Dr Obi was an enigma, a political encyclopedia, a community leader, whose resilience, doggedness are footprints on the sands of time which would be difficult to erase.

“I call on the Obi family and the entire Mbaise nation, to bear the loss of this political iroko, with fortitude, and be consoled that, it is God, that is the giver and taker of life” the statement concluded.

A Call To Serve:Prince Dr.Alex Mbata (ABM) To The Rescue. BY...