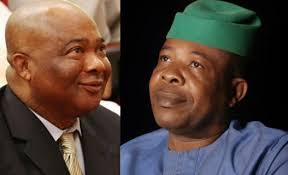 Allegations and counter allegations of how N19.63 billion naria was used to procure earth moving equipment by the past administration of Emeka Ihedioha, has continued unabated ,as aides of Governor Hope Uzodinma of Imo State, and his predecessor, Rt Hon.Emeka Ihedioha on Thursday, continued the fireworks on the issue, ostensibly to sway public opinion in their favour.

The monies, according to the Commissioner, got missing when Emeka Ihedioha was Governor of Imo State for seven months, before he was removed by the Supreme Court on Januaey 14, 2020

Hon. Mayor Eze, who was SA on Local Government and Chieftaincy Affairs during Ihedioha’s government, denied the allegations, describing it as “comic relief for Imolites during covid 19 stay at home period”.

Not done yet, officials of Uzodinma and Ihedioha Thursday, continued firing salvos at each other over the staggering amount of money.

Uzodinma’s SA on Political matters, Batos Nwadike in a statement said the “whopping N19.63 billion missing Imo money may be a tip of the iceberg of the looting that characterized the brief of Ihedioha administration, Imo people are miffed that the Ihedioha administration that preached Due Process, Accountability and Rule of Law only made pretences”

“These allegations are spurious because 100 days in office for the Uzodinma administration is approaching and because they have nothing to offer, they want to distract Imo people” Mr.Onyeukwu told My Radio Fm, Owerri.

‘The whole thing is designed to tarnish the image of His Excellency, Rt Hon Emeka Ihedioha. Senator Hope Uzodinma should just humble himself for a tutelage from Rt Hon Ihedioha.

He said Ihedioha administration entrenched probity and accountability while in office and therefore every business of governance was not shrouded in secrecy.

“Since the inception of Imo State, Ihedioha was the only Governor in the State that did everything in the open. The allegations does not exist

Mr.Onyeukwu said there is nothing wrong if the State and local governments engage in a joint venture.

Man Dies In Owerri Working As A Labourer (PHOTO)

innonews - July 18, 2017 0
A young man whose identity has not been ascertained died on Tuesday while working as a labourer at the new market at Akwakuma, along...

innonews - April 4, 2019 0
Reports say there is a major division in the National Executive Council  (NEC ) of the governing All Progressive Congress,...

innonews - December 24, 2021 0
Philanthropist and astute businessman, Prince Dr Alex Mbata, has called on the people of Owerri zone, to use the 2021 Christmas celebration,...